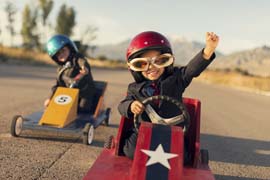 Why seven you ask? I would like to tell you there was deep thought put into the title but really, it was simply a matter of outlining the framework on how to be successful should your credit union ever experience a disaster and it comes down to seven key components.

In 1949 Edward A. Murphy Jr., a rocket engineer for the United States Air Force was involved in testing human acceleration tolerance at Edwards Air Force Base. Mr. Murphy was tasked with creating the 16 accelerometers which were to be attached to the human subject in this experiment. There were two different ways each sensor could be glued to its mount. During the test, it was determined that every single accelerometer was put on the wrong way. Mr. Murphy blamed it on his technician, stating, “If there are two or more ways to do something, and one of those ways can result in a catastrophe, then someone will do it.” The more popular term we are familiar with is Murphy’s Law: “If anything can go wrong, it will”.

There are so many possibilities, so many things that can go wrong. The key is to put your credit union in the best possible position for success. That is the purpose of The SEVEN Components of a Successful Disaster.

Step one of a successful disaster is to define “success”. What does success look like for your Credit Union? Simply surviving a disaster does not constitute “success”. The effects of a disaster can reach far beyond the recovery.

A few years ago we had a customer in Louisiana declare a disaster after hurricane Isaac passed through their state. Having already been through Hurricane Gustav in 2008, they understood the impact a regional disaster could have on a community. We worked with the credit union to put measures in place to back up their core and ancillary systems to our data center in Oregon. We had vendor connectivity in place for their ATM’s, shared branching and Internet Banking, along with branch communications. The credit union also tested on an annual basis.

When Hurricane Isaac hit, they were prepared. Not only were they prepared, they were the first financial institution up and operating in the community. Their members were extremely grateful they had access to their funds but more so, the entire community was appreciative. The vice president shared with me how touching it was to have various people in the community come up to them while withdrawing money from the credit unions ATM’s and thank them for being accessible in a time of crisis.

Because of the credit unions availability to the community, not only did they increase member loyalty ten fold, they experienced a considerable increase in new membership.

I am sure you’ve heard the idiom, “one’s loss is another’s gain”? There are statistics splashed all over the internet citing 80% of businesses that experience a major disaster go out of business within 18 months. I can’t speak on this statistic since I’ve never come across a credible source. However, I can speak directly to the fact that if this credit union gained members, someone else lost them.

Defining success requires involvement by credit union leaders, including IT determining the implications of a short, medium and long-term disaster. It is important to remember that not all disasters are the same. They can range from a single server, controllers failing in a SAN that brings down the entire virtual environment, communications failure, to total destruction of the data center and anything and everything in between. Over the years, I have seen every one of these scenarios occur at one time or another.

By the way, earlier I mentioned Murphy’s Law. Not only did it originate at Edwards Air Force Base but Edwards Federal Credit Union  happens to be a customer of ours. In 2013, they lost their processor board and were forced to declare a disaster. However, I am happy to say, they were well prepared and they experienced a successful disaster (see case study). Please check back with us next week when we cover component two, “Needs Assessment”.