As Women’s History Month comes to a close, the IMS team is putting the spotlight on the women who have played an essential role in the field of information technology and computer science. The four pioneers we’ll be featuring today have developed some of the most vital components of current technology, including the creation of the first computer program, development of programs that influence how modern computers work, and the advancement of human space exploration among many other achievements. 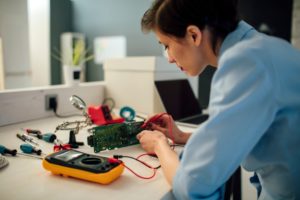 Read on to learn more about the world-changing contributions that these four women have made in IT:

Because of her significant contributions to science, technology, engineering, and math (STEM), Lovelace is celebrated annually on Ada Lovelace Day, which is held every second Tuesday of October.

Grace Hopper was a computer scientist and an admiral in the United States Navy. She was one of the first programmers for the Harvard Mark I computer, an electromechanical computer used during World War II. In 1944, she created a Manual Of Operations for the Automatic Sequence-Controlled Calculator, detailing the basic operating principles of computing machines.

Hopper also invented the compiler, a program that translates instructions in English into a target computer’s language. This groundbreaking invention led to other computing advancements, such as formula translation, subroutines, and code optimization.

Every year, women technologists around the world attend the Grace Hopper Celebration in her honor.

If you’ve read the book or seen the movie Hidden Figures, Katherine Johnson should be a familiar name. Johnson is an American mathematician who helped execute vital calculations that ensured safe space travel from the ‘50s onwards. She worked on maintaining the accuracy of NASA computers as well as co-authored a report that included equations used for orbital spaceflight.

In 1961, she performed trajectory analysis for the first human space flight. To prepare for the 1962 orbital mission of John Glenn, Johnson ran equations on a desktop mechanical calculating machine. Johnson further advanced our journey into space exploration by working on calculations for the Space Shuttle, Project Apollo’s Lunar Lander, and the Earth Resources Satellite.

Margaret Hamilton is an American systems engineer and computer scientist who spearheaded the Software Engineering Division of the MIT Instrumentation Laboratory. NASA credits Hamilton with coining the term “software engineering” after working on Apollo 11, the first spaceflight to successfully land people on the moon. Hamilton’s insistence on comprehensive testing led to the mission’s success and the safety of its astronauts.

The software that Hamilton helped develop for Apollo 11 was later used on the Space Shuttle, Skylab and the first digital fly-by-wire aircraft systems.

The Future For Women In IT

Today, women continue to thrive in computer science and IT as they invent new innovative tech, improve programming, and create tools that we use in our everyday lives. Women in tech have made significant contributions in entertainment (special effects), government (IT systems), and every other industry (innovations in laptop computers that allow for work-from-home setups, as well as Bring Your Own Device programs in offices).